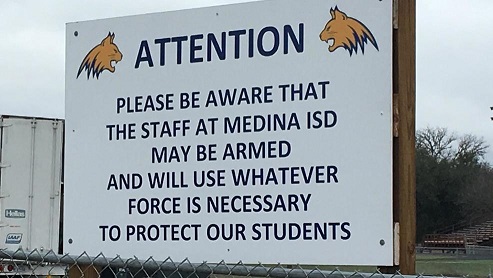 The idea of arming teachers to protect students is nothing new, but in the aftermath of the Florida school shooting, this idea has once again risen to the surface. Could this be a common sense solution to school shootings? I would say yes if used in conjunction with other common sense security measures such as locking the door! However, there are some talking heads and liberal politicians claiming that this just adds to the problem of ‘gun violence’ and that teachers can’t be trusted to handle firearms around children. Some black lawmakers are even claiming that armed teachers would be a danger to minority students – really?!?! The fact is, some school teachers and/or other school employees could safely and effectively carry a firearm and act as an effective deterrent to those who might wish to harm our school kids. My High School principal is now 93 years old; he’s still sharp as a tack, drives a Ford Mustang GT, and carries a Glock 43 – he would have been ready willing and able (if allowed) to defend his students if the need arose. I can think of several people that worked at the school who also would have risen to the occasion, again, if allowed and necessary. Should all teachers carry guns – heck no, some are far too incompetent, too politically biased, and too ignorant of the real world to carry a gun much less be anywhere NEAR your kids. (See the video below.) But I have to ask the question; if you can’t trust a teacher with a gun, how can you trust them with your CHILD? Seriously, if they are too incompetent to learn and practice the basics of gun safety, how can you expect them to prepare your kids for life in the real world?

Government schools continue to be soft targets for bad people and liberal politicians will insist they stay that way. Gun Free Zones are killing fields for nut jobs and no amount of signs, hugs or protests will change that. Instead of recognizing and acknowledging that these failed policies have left our schools at risk, they use these tragedies to promote their own agenda. They march your children in front of the media as pawns to sell their snake oil all the while proclaiming their moral superiority. Shameless.

Many years ago while working as a delivery driver, I was attempting to deliver to a small private school in a rather rough part of town, when much to my surprise I found the door to be locked! Yes, locked; most schools you could walk right in the front door and make your way down to the office without seeing a soul. Not here, you had to use the intercom to get their attention then someone would have to ‘buzz’ you in. Security; huh, what a novel idea! You lock your front door don’t you? You might have a gun in your home to protect your family, maybe security cameras or an alarm system – why not our schools? Instead of attacking the rights of law abiding gun owners, how about we apply some common sense security measures and start by taking down those stupid ‘Gun Free Zone’ signs. Common sense is so uncommon it ought to be considered a super power.